Published by the Estonian American National Council in 2016, Estonians in America, 1945-1995: Exiles in a Land of Promise  details the history of Estonians in the United States from the time of  World War II. The hard-cover book has over 560 pages, rich with facts and photographs detailing the history and activities of the Estonian communities in the United States, primarily comprised of Estonian refugees who came to the U.S. after Estonia was occupied by the Soviet Union and their descendants.

Editor Priit Vesilind has built on the manuscript originally prepared by Mr. Enn Kõiva, with contributions from many other individuals. Mr. Vesilind, currently a freelance writer, is a former senior writer and photojournalist for National Geographic magazine.

Estonians in America, 1945-1995: Exiles in a Land of Promise is the perfect gift for your friends and family. Also consider donating a copy to your local public library or college, as it is an important historical reference book.

This book is available through the holiday season www.Amazon.com, or directly from the Estonian American National Council, email: [email protected].

* If you choose to shop via Amazon this season, you can make a difference by clicking on https://smile.amazon.com/ch/13-5622310  Amazon will donate 0.5% on eligible purchases to EANC.  Aitäh! 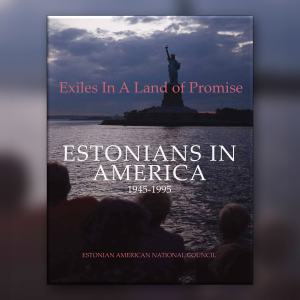 “To everyone involved in this book: KUDOS TO YOU ALL!! … it's an absolutely beautiful book that I am so happy I ordered.  My almost 96 year old mother, Juta Jarver, lives with us and is legally blind. It has become a nightly ritual for me to read sections of the book...It was a walk down memory lane… I just had to write to thank you for all the hard work on this book and I am hoping somebody will continue from 1995-2015?  Thank you again for a wonderful treasure!” -  Tiina Jarver-Ers

“It is fascinating and wonderful!  Suur tänu!”  - Tõnu Kalam

“It is a remarkable book and the most extraordinary book that I’ve seen in a very long time.  Many, many thanks to everyone involved in the project.”  - Andres Wirkmaa